As many states began banning certain books in public schools, the Brooklyn Public Library (BPL) launched the Books Unbanned program, which gives 13- to 21-year-olds access to free e-cards for a ‘limited time’.

‘[The BPL e-card is] Providing access to our complete e-book collection as well as our learning databases,’ says the library’s website. According to Politico, it offers residents and non-residents access to 25,000 books.

At the end of the day, BPL feels compelled to help because spreading information is part of its mission and has helped more than 5,000 people as more states move towards bans.

“We’re saying this is what libraries do, we provide access to these materials,” BPL CEO Linda Johnson told Politico.

‘Literature is such a powerful thing and it’s something that helps you get to know yourself, your world better, it allows you to see new things and we don’t think anyone should be away from it, no matter where they live.’ 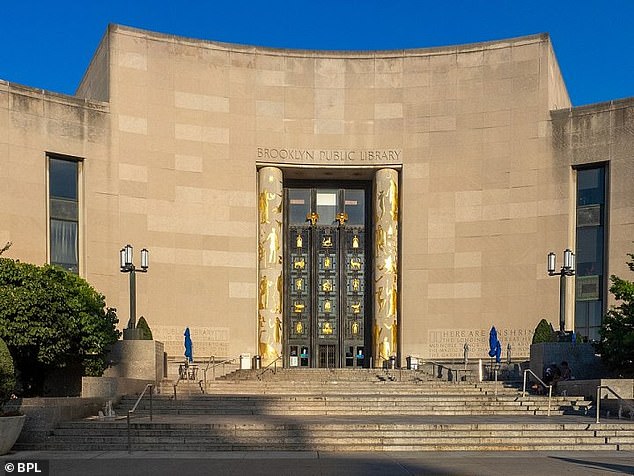 With a digital library card, people ages 13 to 21 can freely access restricted books through the Brooklyn Library.

However, the BPL program is reaching students across the country and has encouraged a group of Oklahoma mothers to create yard signs with QR codes at the library program.

‘We’re basically crazy moms,’ Katie Cruz-Long, of Norman, Oklahoma, told KFOR earlier this month. ‘I want my son to get the best education. I don’t see why that can’t happen in public schools, because that’s what they’re designed for.’

Long approached BPL to ask for permission to use the QR code on their lawn signs, who told her: ‘Go for it.’

‘We did that. I placed an order for 250, and we’re basically doing it at cost because we’re not trying to make a profit,’ Long told KFOR.

Long’s idea for the lawn signs came after former Norman High School English teacher Summer Boismier resigned after sharing a QR code with her students, prompting a parent to complain. 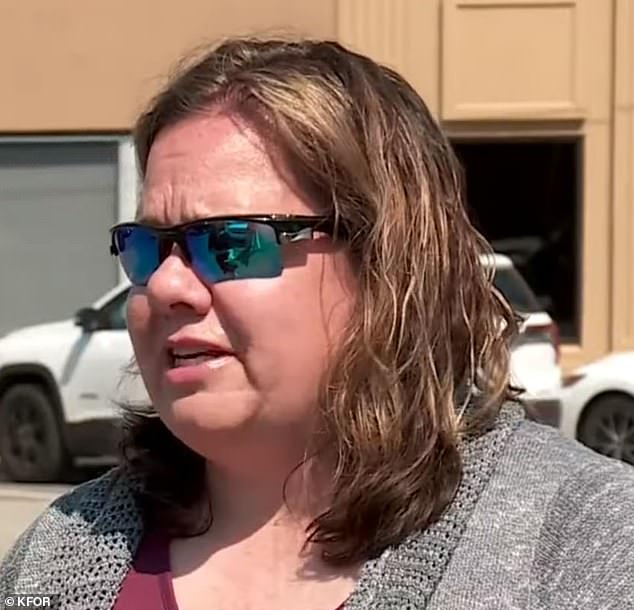 Oklahoma mom Katie Cruz-Long has organized yard signs featuring the Brooklyn Public Library’s QR codes to help children in Norman access books. ‘I want my son to get the best education. I don’t know why that can’t happen in public schools, because that’s what they’re designed for,’ she said. 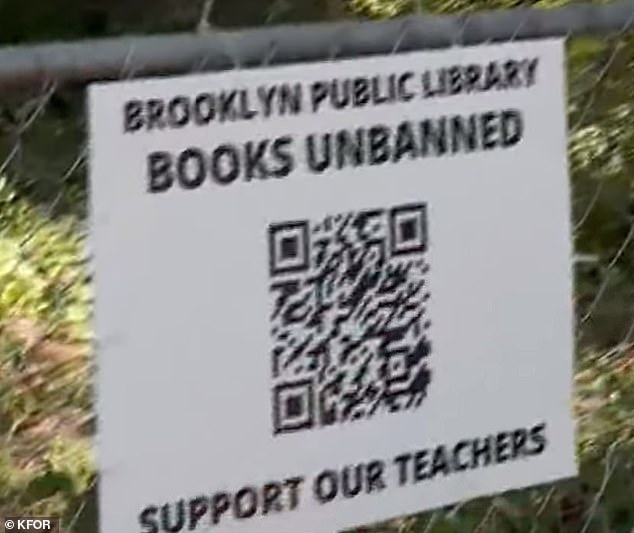 She said she initially thought she was on administrative leave, but the district said she had resigned.

However, the school denied giving him access to the QR code, but for making “offensive and divisive comments” about state politicians, according to Politico. They accused him of using his classroom to ‘put on a political display by expressing his views’.

Now his teaching license is in jeopardy.

“The QR code has become — for lack of a better phrase — it’s become a symbol of resistance locally in my state,” she said in an interview, according to Politico.

However, supporters of the ban on the books claim that it protects children from sexually explicit content, racism, gender identity, or political discourse, especially those espoused by the left.

“It’s their business whether a public library buys a book or a parent buys a book for their child, but it’s very problematic for schools to have or link to pornographic material.”

Oklahoma Education Secretary Ryan Walters also wants to revoke Boismier’s license and is reportedly irritated by the BPL program, according to Politico.

‘Instead of being more concerned about children and their development and what’s appropriate for children at that grade level, they’ve decided to take an ideological bent here – not an academic practice – but an ideological one to push it into our schools. He said according to Politico.

Additionally, No Left Turn in Education – a group that supports some book bans – has also protested its ‘left-wing conservatism’ and content containing sexually explicit imagery.

Ilana Fishbein told Politico, ‘School is not a playground for politicians. ‘School is about educating children to give them the tools they need to succeed in life. This should be neutral territory.’

According to PEN America, nearly 3,000 schools in 26 states have implemented some form of ban.

Opponents of the bans argue that these bans stifle discussion and understanding of institutional racism and deprive LGBT+ communities by limiting access to materials that help them understand themselves.

Norman parent Heather Hall – who owns a bookshop and whose secondary school goes by the pronouns they/them – said it was ‘extraordinary’ that BPL was giving students access to these books. 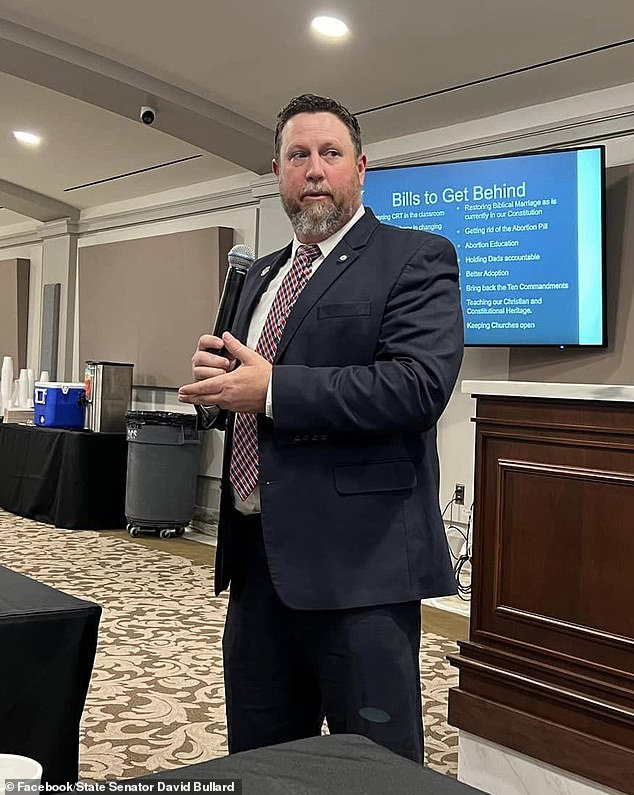 “I have a child of mine who is going through some stuff in middle school and has access to these very kind people across the country,” Hall said.

Deborah Caldwell-Stone, director of the American Library Association’s Office for Intellectual Freedom, said there has been a flurry of legislative activity in Oklahoma that is used to “strictly control” children’s education.

Texas has the largest book ban, censoring more texts than any other state this year.

Republican Representative Matt Krause compiled a list of 850 books that have topics around race and sexuality and distributed them to schools, asking if they had them. According to Politico, some schools began removing the books.

Parents in Texas can also temporarily remove their children from the classroom when material that goes against religious beliefs is being discussed. 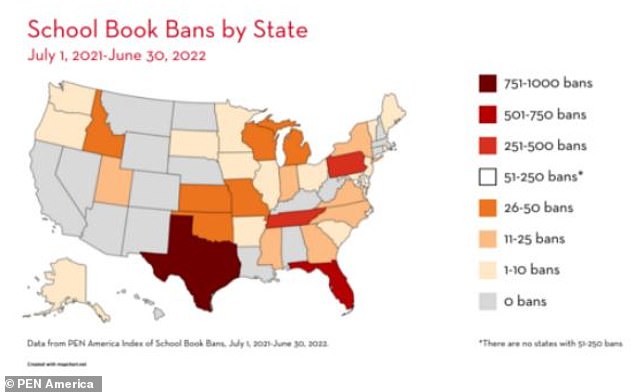 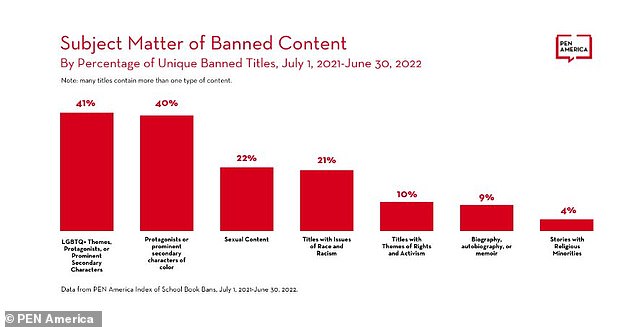 Virginia Governor Glenn Youngkin has promised to give parents more power over their children’s education.

In Wisconsin, Gov. Tony Evers is warning citizens that if he loses re-election, the book is likely to be banned.

DailyMail.com has contacted the Pioneer Library System – the local system in Norman – for comment.

More and more books are being added to the list of banned books, from classics to modern novels.

Some of the most famous books, such as 1984, The Great Gatsby, The Grapes of Wrath, and To Kill a Mockingbird.

Here’s a list of the most challenging books of 2021 and the reasons why, according to the American Library Association: