Britain’s FBI has joined the desperate search for a missing student nurse – shrouded in mystery over her sudden disappearance six weeks ago.

Owami Davies, 24, was last seen walking towards the Norbury area on July 7 at around 12.30pm on London Road in Croydon, south London.

The King’s College student was last seen on July 4, three days after she left her family home in Grace, Essex.

But she has not turned up amid growing concerns about her welfare, while the National Crime Agency (NCA) has now joined the missing persons case and is trawling through six reported sightings of her.

A statement last night said: ‘The investigation, led by the Metropolitan Police, is being assisted by experts from the NCA’s Major Crime Investigation Support Command.

‘If you have any information that could help locate Owami Davis please contact them.’

The Met also revealed that she was possibly seen in Croydon ‘in the days since she was last seen’ and says she may still be ‘in the local area and in need of help’.

CCTV footage released by police from July 7 showed Owami wearing a black jacket, red T-shirt, light gray joggers and slider-style shoes. He also had a white bag on his shoulder. 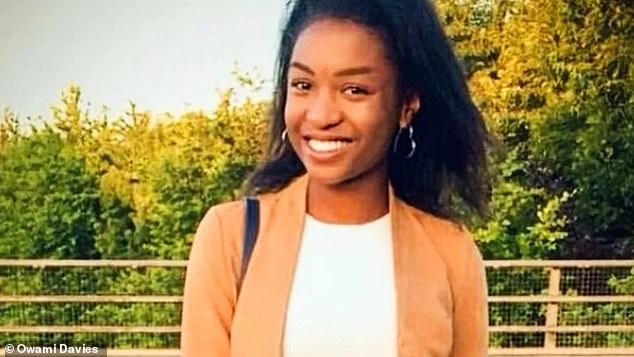 Owami Davies, 24, has been missing since leaving her family home in Grays, Essex, on July 4 – more than six weeks ago 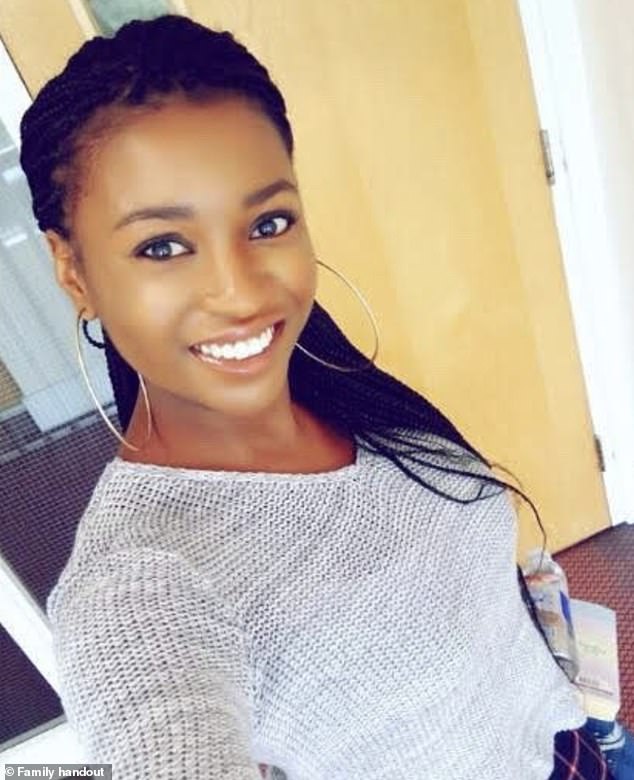 The King’s College nursing student was described as ‘very happy’ and got a job at Guy’s and St Thomas’ Health Trust in London after graduating. 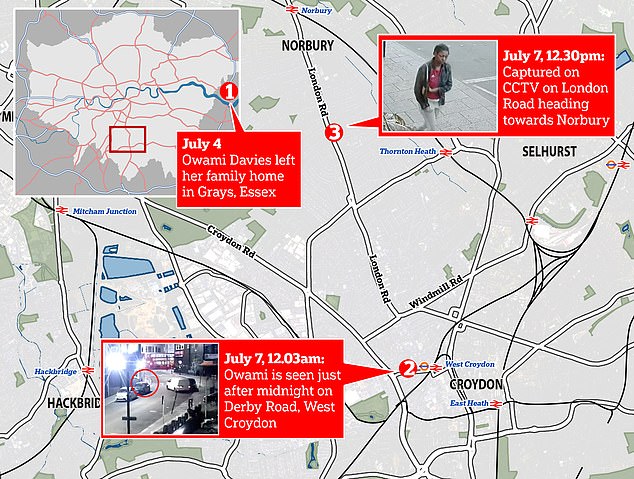 The Disappearance of Student Nurse Owami Davis: A Complete Timeline

The sudden disappearance of Owami Davis, who has been missing for more than six weeks, is shrouded in mystery.

July 4: Owami left his family home in Grace, Essex, where he lives with his mother Nicole Davies, 46, and brothers

July 7: The student nurse was seen walking in the early hours along Derby Road, West Croydon, 28 miles from her home.

July 7: An unconfirmed sighting was then reported to police near Clarendon Road at around 7am on the same day.

He is seen wearing a dark jacket, red t-shirt, light gray joggers and slider type shoes. He also had a white bag on his shoulder.

July 31: Three weeks after Owami’s disappearance, the Metropolitan Police made a public appeal for help in the search for the first time.

August 3: Detectives confirmed three men from the Croydon area – aged 23, 27 and 32 – had been taken into custody over her disappearance.

August 3: The Met released images of Owami inside a shambles in Derby Road, Croydon, on the night of July 7.

The army has also asked to talk to the driver of the white van parked on the same road.

It is revealed that she was in the company of a man and crossed the road when the van was taken out.

Officials begin speaking to the public and handing out appeal leaflets.

August 4: Another arrest has been made in connection with the disappearance, a 23-year-old man at a Croydon address on suspicion of murder

August 5: More than a month after she disappeared from her family home, police issued another public appeal.

August 7: Another police appeal reveals an unconfirmed sighting reported at 7am on July 7 in Clarendon Road, West Croydon.

A 27-year-old youth has been arrested on suspicion of kidnapping, the fifth arrest.

August 9: The Met is appealing for the public’s help in its search after revealing that officers have ‘searched homes and parks, watched hundreds of hours of CCTV and carried out extensive door-to-door enquiries’.

August 16: Police say they have received reports of ‘someone of Owami’s description being seen in the Croydon area in the days since he was last seen’.

But despite the case being seen as a missing persons investigation, specialist crime officers are still investigating the disappearances.

During the investigation, five people were arrested and released.

Two men, aged 27 and 23, from Croydon, were arrested earlier this month on suspicion of murder.

Three more persons aged 23, 27 and 32 have been arrested on suspicion of kidnapping.

Owami was said to be ‘really happy’ and has about two months left to study nursing at King’s College.

After graduating, she got a job at Guy’s & St Thomas’ Health Trust in London.

The student worked in A&E during the Covid pandemic and was interested in researching the disease.

She went missing from the family home where she lived with her mother and brothers in Gray on July 4.

Owami was then seen walking in the early hours of July 7, 28 miles from her home in Derby Road, West Croydon.

An unconfirmed sighting was reported to police near Clarendon Road at around 7am later that day.

The latest confirmation was that Owami was walking along London Road in Croydon towards the Norbury area on July 7 at around 12.30pm.

But more than a month after the CCTV footage in Croydon, no pictures or footage have been released.

Owami has not been in contact with his family or come to work during the period of his disappearance.

Detective Chief Inspector Nigel Penney, who is leading the investigation, said yesterday: ‘The search for Owami Davies is ongoing, and we are conducting searches, appeals and extensive CCTV inquiries to try and locate him.

‘I would like to remind people that although specialist crime detectives are investigating, this remains a missing person’s search.

“We are obviously very concerned for Owami’s welfare and it is possible that he is in the local area and needs help.

‘We have had reports of someone of Owami’s description being seen on CCTV in the Croydon area in the past few days and we hope he is safe and well.’

Mr Penny has asked people to look at pictures of the missing student to see if they remember seeing him in the area.

Investigators first appealed for the driver of a white van which was parked on Derby Road when Owami was last seen driving forward.

He and a man crossed the road as the van pulled out.

And her mother, Nicole Davies, 46, made repeated emotional appeals to help find her daughter.

‘I’m begging, I’m asking the public for help, if you know, if you’ve heard or seen, or if he’s passed you, please speak up.

She continued: ‘I sit here as a desperate mother who knows or has heard anything to help me find my child, that’s all I’m asking, just help me find him.

‘Or to her, if she’s somewhere and hears this, please come home. We miss him so much, his brothers and I miss him, need him.

‘We’re not perfect, we just want her to come home and, if she’s listening, she should know she’s not in trouble.’ 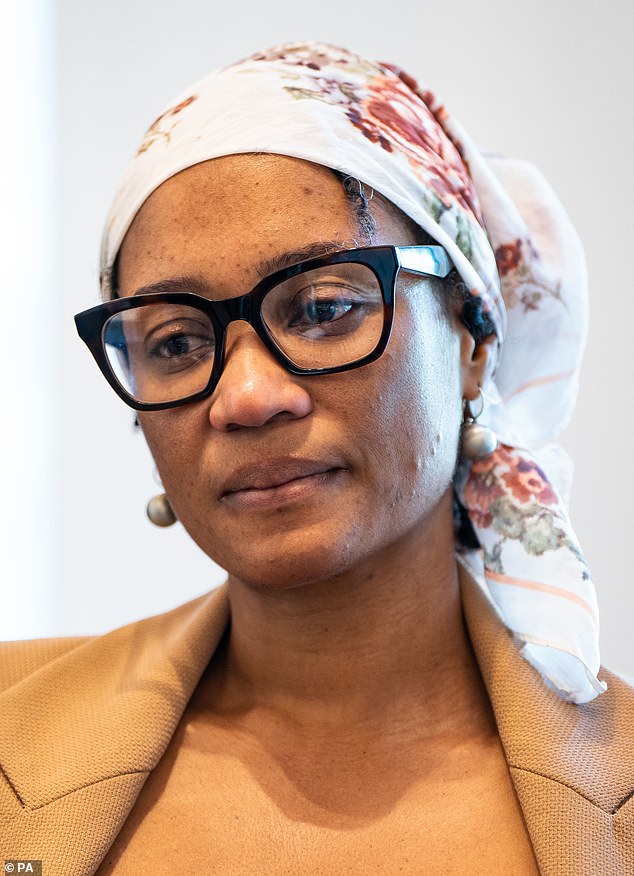 Nicole Davies, 46, appealed for anyone with information about her missing daughter’s condition to come forward. She said: ‘I sit here as a desperate mum who knows or has heard anything to help me find my baby, that’s all I’m asking. 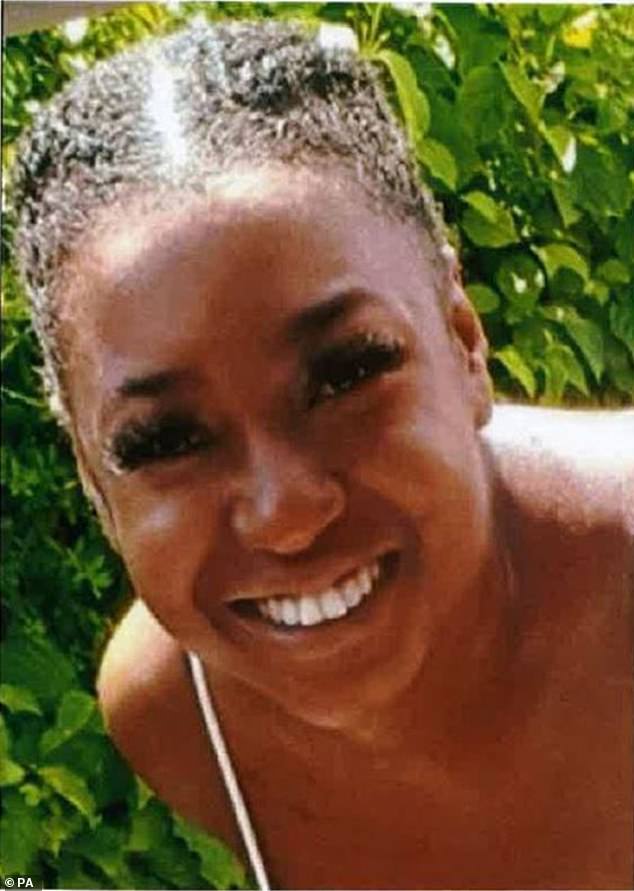 Student nurse Owami Davies, 24, from Grays, Essex, was last seen at around 12.30pm on July 7 in London Road, Croydon, South London. Police today said the missing student may still be ‘in the local area and in need of help’ after several possible sightings.

Dave Stringer, who is the Chief Superintendent of the South Region Commander, assured the community that they are doing everything they can to help find the young woman.

He said: ‘We understand the real concern currently felt in our community and we have additional officers to reassure you.

‘Please take the opportunity to speak to these officers about your concerns, they are there to help you and answer any questions you may have.

‘Finally, I would like to thank everyone who helped us and helped us find Owami.

‘We really appreciate the fantastic support we have received from both our community and our partners.’

The Met’s specialist crime command is leading the investigation into her disappearance and has brought in support from the National Crime Agency.

Five people arrested so far during the investigation have been released on bail.