A dummy of Frankenstein’s monster housed at the V&A has sparked a trans-Atlantic ownership row after a US museum called for it to be repatriated.

The wooden effigy, which stands seven feet tall, is based on actor Boris Karloff, who played the creature in films made in the 1930s and 1940s.

Dressed in the original costume worn by this late English actor, the detailed dummy includes bolts at the neck and metal fastenings at the skull.

The Natural History Museum of Los Angeles County (NHM) is contesting ownership of the monster, stating that it owns both the effigy and its clothing.

In 1967, the dummy and its original outfit were reportedly destroyed, with pieces believed to be missing. 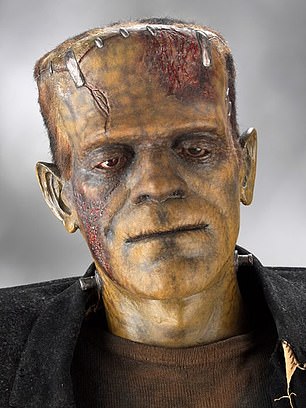 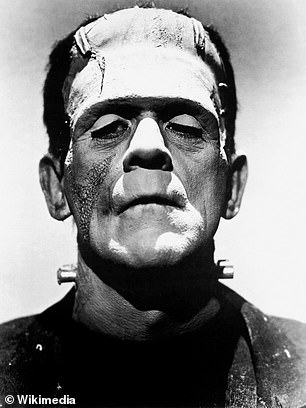 The wooden effigy (left), which stands seven feet tall, is based on actor Boris Karloff (right), who played the creature in films made in the 1930s.

It called for the V&A to return the items, saying the NHM ‘did not consent to the sale of these items’, The Telegraph reported.

But the London-based museum said the monster could not be returned to the US under UK law, and was legally acquired for its collection.

The National Heritage Act 1983 states that a museum ‘may not dispose of any object in its collection’ unless it meets certain criteria.

The statue was donated to the NHM in 1935 by Universal Studios, the production company behind Bride of Frankenstein.

The V&A believes it was ‘probably’ used as a prop in the horror-sequel.

According to V&A research it was loaned to the Academy of Motion Pictures in 1949.

In 1967, the dummy and its original outfit were reportedly destroyed, with pieces believed to be missing. 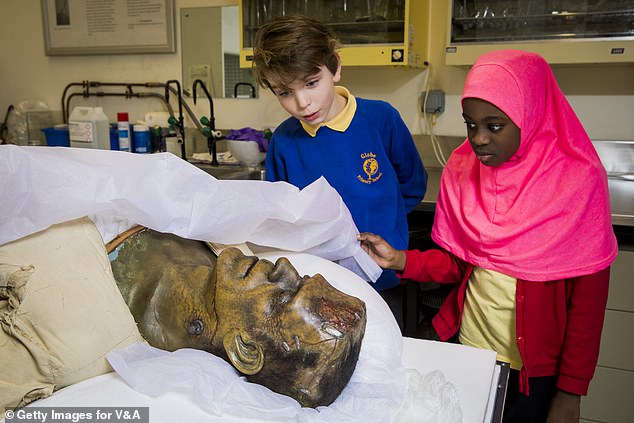 A dummy of Frankenstein’s monster held at the V&A has caused a trans-Atlantic row. Pictured, two primary school children from Bethnal Green look at the giant prop 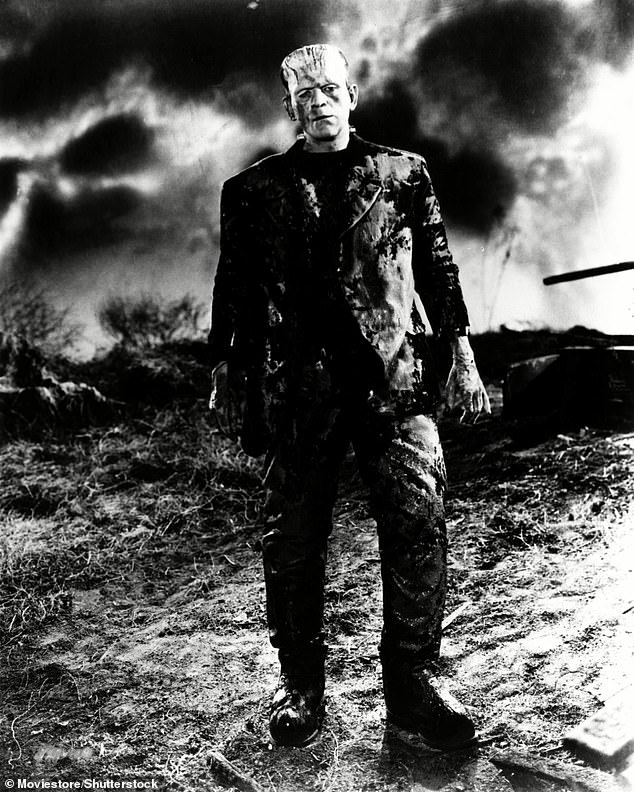 Boris Karloff as Frankenstein’s monster, a role that developed his notoriety as a horror actor. 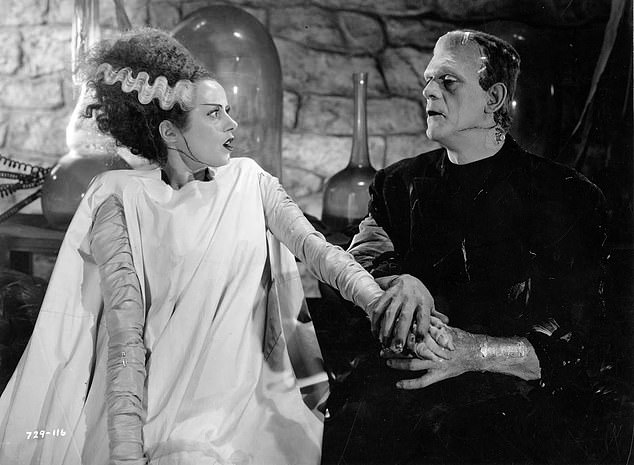 Boris Karloff was an icon of horror cinema

He moved to Canada and took the stage name Boris Karloff after joining an Ontario-based touring company.

For more than a decade, he traveled the US performing in low-budget theater before coming to Hollywood.

He became known as an icon of horror cinema after playing the monster in the 1931 film Frankenstein.

Outside of Mary Shelley adaptations, he starred in more than 170 films between 1919 and 1968, including Scarface.

The actor also spent time on stage and television.

He married six times and had one daughter, Sarah, with whom he shared a birthday.

During his later adult life, the actor struggled with chronic back problems – a result of the heavy braces he wore as part of his Frankenstein’s monster costume.

He died of emphysema on February 2, 1969 in Midhurst, Sussex.

But 21 years later, in 1988, London’s Museum of the Moving Image bought the mannequin and ragged clothes at auction.

The museum, run by the British Film Institute, then closed in 1999.

15 years later, as Frankenstein’s monster was moved to the V&A, NHM staff in California were surprised to find both the dummy and its costume unharmed — and more than 5,000 miles away.

NHM told The Telegraph that it was “not aware of and did not agree to the sale of these items”.

However the V&A said that when the monster was bought at auction in 1988, there were no legal ownership claims.

UK law prevents the V&A from giving away items in its collection because it is a national museum.

The National Heritage Act 1983 prevents museums from selling objects held by the public.

If they are duplicated or permanently damaged they can only be removed from the museum’s collection by the trustees.

Issues such as the return of museum collections are also subject to this law.

The effigy will go on display at the V&A Museum of Childhood in Bethnal Green which is undergoing a £13 million makeover.

The Los Angeles museum said it wants an ‘open dialogue’ with the V&A on a possible ‘cultural exchange’ to benefit visitors to both museums.

A spokesperson for the V&A told MailOnline: ‘The Bride of Frankenstein dress and dummy were acquired at auction by the Museum of the Moving Image in 1988 which acquired a fine title.

‘In 2014 the object was donated to the V&A and added to the collection.

‘The V&A has been in contact with representatives from the Natural History Museum in Los Angeles about the history and provenance of the object, and has offered a number of partnership opportunities.

‘We welcome the opportunity for further discussion.’

Boris Karloff was an icon of horror cinema who played the monster in the 1931 film Frankenstein.

The Natural History Museum of Los Angeles County has been contacted for comment. 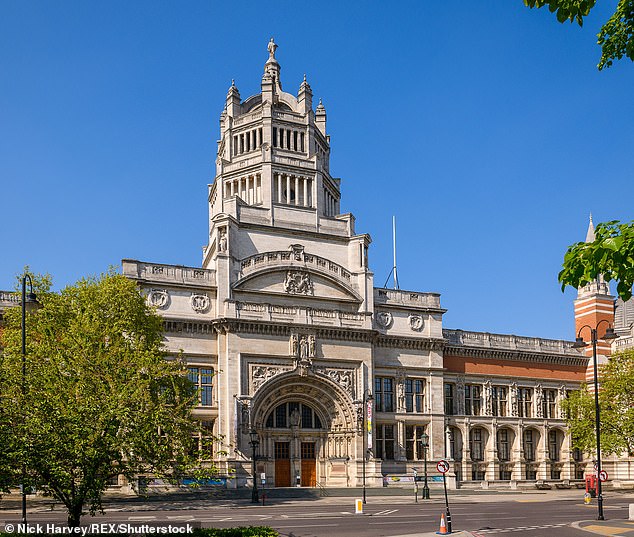 The V&A (pictured) said that when the monster was bought at auction in 1988, there were no legal ownership claims.

The Elgin Marbles could return to Greece under a new ‘Parthenon Partnership’ to establish greater ‘cultural exchange’, the deputy director of the British Museum has said.

Last month, it was revealed that the Elgin Marbles could be returned to Greece after more than 200 years as part of a ‘Parthenon partnership’ proposed by the British Museum’s deputy director.

The marbles are made up of 17 marble figures and are part of a frieze decorating the 2,500-year-old Parthenon temple on the Acropolis by the sculptor Phidias.

The statues were acquired by Lord Elgin in the early 19th century when he was British Ambassador to the Ottoman Empire and have been the subject of a long-running dispute over where to display them ever since.

The Elgin Marbles are currently on display at the British Museum, but the Greek government has been demanding their return for years. 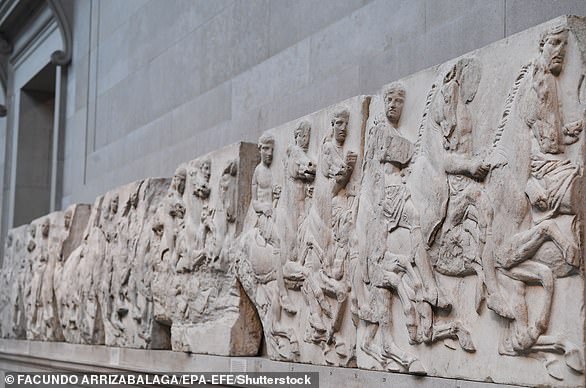 The British government has agreed to Unesco-backed talks on the repatriation of the Elgin Marbles, featured on display at the British Museum, which could see the artefacts brought back to Greece and resolve a long-standing dispute.

However in an interview with the Sunday Times Culture magazine, deputy director Jonathan Williams said the British Museum wanted to ‘change the temperature of the debate’ around the marble work of art.

Mr Williams said: ‘We are calling for an active “Parthenon Partnership” with our friends and colleagues in Greece.

‘I strongly believe that there is room for a truly dynamic and positive conversation in which to find new ways of working together.’

The British Museum has not said it will return the statues, with Mr Williams arguing they are an ‘absolutely integral part’ of the collection.

He added: ‘There are so many amazing things we’d be happy to borrow and lend. This is what we do.’

The Elgin Marbles (pictured) are a 17-figure collection of classical Greek marble statues of Zeus, the god of the sky in ancient Greek mythology, created by architect and sculptor Phidias. ancient world

The Prime Minister of Greece has on several occasions called for the Parthenon Marbles to be returned to Greece, even offering to loan his country’s other treasures to the British Museum.

Kyriakos Mitsotakis reiterated that Greece is open to talks but said that ‘baby steps are not enough’. We want a big step’.

The director of the Acropolis Museum, Nikolaos Stampolidis, also said a ‘positive Parthenon partnership’ could be a ‘basis for constructive dialogue’ with the proposal.

He added: ‘In the troubled days in which we live, returning them would be an act of history.

‘It will be as if the British are restoring democracy themselves.’ 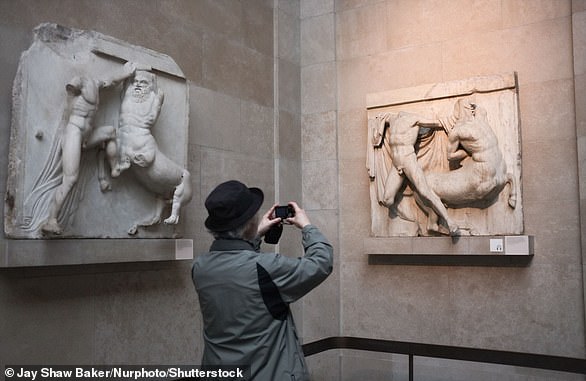 The Elgin Marbles were taken from the Parthenon in Athens by the then British Ambassador to the Ottoman Empire, Lord Elgin, between 1801 and 1812, and are now on display at the British Museum (pictured).