Racket prides itself on ‘super value and super-fast’ service.

Gangs use pictures of the Queen and Buckingham Palace on social media to advertise passports that contain ‘high quality’ biometric chips needed to pass UK border controls. Fraudsters have watermarks, holograms and fluorescent security features that are only visible under ultraviolet lights when checked into airport scanners.

A UK-based agent for a gang offered a mail undercover reporter a fake British passport for £3,500 and an EU passport – which can also be used for illegal entry here – for £2,000. He said, ‘Many people came this way. Whatever you like. Do you like French? Do you like British? Do you like Italian? Everything.’

One passport faker advertises through videos on TikTok – some with more than 17,000 views – showing a cartoon queen winking. The message in Albanian said: ‘Anyone interested in a European passport suitable for travel to England please get in touch.’

A Mail reporter – posing as someone hoping to bring relatives to Britain – contacted gang boss ‘Nick’ who laughed and gave the thumbs-up during a video call from his home in Albania. 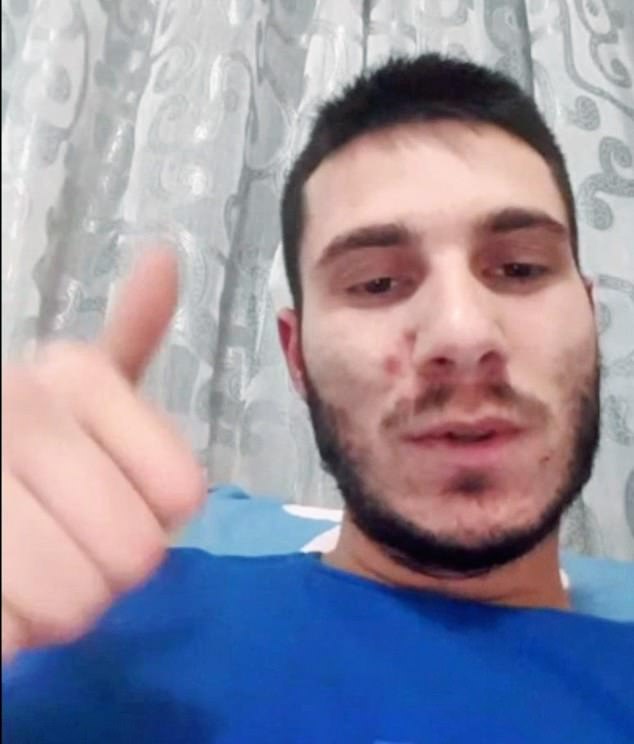 Fraud boss: Albania-based ‘Nick’ laughed and gave a thumbs-up during a video call from his home in Albania. 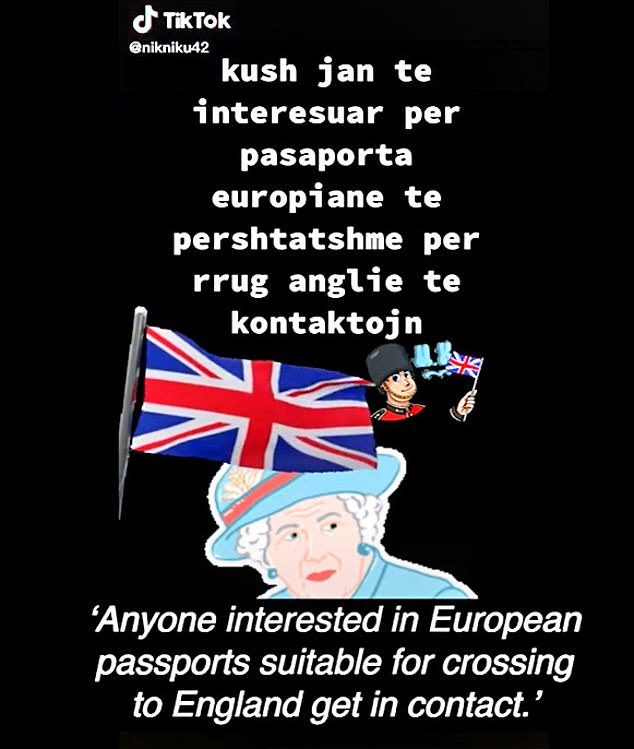 Advertisements for fake passports feature a winking cartoon queen. A message in Albanian reads: ‘Anyone interested in a European passport suitable for travel to England contact’

He put our reporter in touch with his cousin, who said he had arrived on a fake passport and was living in Birmingham. He said: ‘I only had one passport and now I’m in the UK.’ He added that his cousin in Albania was a ‘serious’ operator and made fake passports with biometric chips to ensure they passed security scanners. He said: ‘The mini-chip contains your name, nationality, date of birth, your middle name, your surname.’

He sent a video of him making a passport.

Another forger advertises the ‘newest passports on the market with all security features’ through a group on the messaging service Telegram. The posts include a video of a woman making a fake UK passport and scanning it through a computer, with the caption: ‘English passport with high quality chips and data displayed on system.’

The gang told an undercover reporter that British passports are at a premium and sell for £3,500, plus delivery charges. Crooks are selling European passports for £2,000 – and fake Slovenian versions are said to be popular. 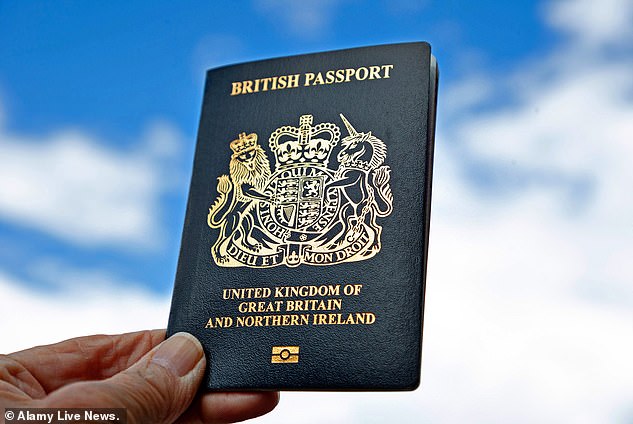 In one video, a gang member posted a photo of a fake Slovenian passport and a boarding pass with the same name for a Ryanair flight from Spain to Stansted on December 31: ‘New Year’s Resolution.’ The gang’s ‘customer’ said his passport was carefully checked at the airport with a computer scan but was ‘fine’.

Other posts show customers’ boarding passes and fake documents used to fly to Leeds and Manchester.

The main operation is based in Albania, where the passports are made, but the group sells to customers around the world.

When the Mail contacted the crooks as a potential customer in the UK hoping to bring a relative here from Spain, we were directed to their UK-based agent. The man, who gave his name as ‘Jimmy’, told reporters on WhatsApp that he entered the UK ten years ago using a fake passport and now lives in Luton.

He gave a step-by-step guide on how to use fake documents. 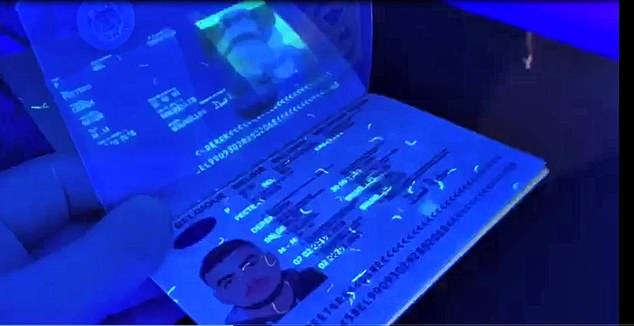 Security: Fake passports are said to contain important ID details that show up under UK scans

Another group, passport.idcard.albania, with more than 3,000 followers, posts footage of an England plane and a fake passport, saying: ‘Travel to England with international passport, super price, super fast. Get in touch.’ And an Instagram page features pictures with a message in the biography: ‘We offer high quality passports, ID cards or EU driving licenses to travel to the UK or use in the EU.’

Fake passports can avoid detection when swiping through immigration because it is believed they are not automatically checked against a database of genuine passports.

Fraudulent bank accounts on sale for £950

A gang charges illegal immigrants up to £950 to open UK bank accounts. It advertises in videos posted on an Albanian language TikTok page called ‘Bank Card UK’. Some have been viewed more than 50,000 times.

Promising ‘bank cards for all Albanians in the UK without documents’, the site also offers fake IDs, utility bills, bank statements, payslips and landlord references. Illegal immigrants are banned from opening bank accounts in this country.

An undercover journalist was sent a UK mobile phone number to call, posing as a messaging customer on a TikTok account. The man he spoke to later said, for those not identified, he could set up accounts at several banks, including Santander, for £950. He also offers a Barclays account for £350, although this requires the customer to provide a passport.

A Tiktok spokesperson said, ‘This content has no place on Tiktok.’

Dr Ben Greening, of Migration Watch UK, said of our revelations: ‘This is shocking confirmation of the sophistication with which criminals are plying their fraudulent trade. The idea that someone can buy a fake British passport for £3,500 marks holes and widens holes in UK border security. Unless the government gets serious about tougher law enforcement and border controls, this threat is likely to grow, with a worsening security risk for UK families.’

The National Crime Agency has warned that fake identity documents which allow hardened crooks to slip into the country undetected are a ‘key enabler’ of crime in Britain. Recent figures show that nearly 2,000 fraudulent documents used to try to enter the UK are found by Border Force each year.

TikTok removed and permanently banned the sites after being alerted by mail. A spokesperson said: ‘Criminal activity has no place on TikTok. Our Community Guidelines prohibit any content that depicts, promotes or enables illegal activities. Any content that violates these policies will be removed immediately and action will be taken against accounts.’

The spokesperson of the passport office said, ‘Making a fake passport is a crime and those who try to cheat the system will face the full consequences of the law. We are aware that criminals use social media to sell fraudulent goods and we expect companies to remove and remove them.’

Our investigation comes as the issue of immigration gripped the Tory leadership contest over the weekend. It also emerged last week that shocking mistakes had allowed hundreds of Channel migrants to disappear without a trace, fueling security fears. Serious failures in the way arrivals were processed at Dover meant that in many cases their identities were not logged properly.