Richard Bean is back at the National Theater with the brilliant, crowd-pleasing comedy to rival his One Man, Two Governors, which launched James Corden as a global phenomenon.

Coincidentally, Corden and Son were sitting across from me this week and enjoyed the gloriously nostalgic and daringly outrageous knock-about farce co-written with actor Oliver Criss (who played Dim Tough in the original) as much as I did. A Man…) and based on Sheridan’s 18th century classic The Rivals.

Instead of a Regency bath, the action takes place at an RAF base in West Sussex during the war in Britain, with our plucky pipe-sucking hero Jack (Laurie Davidson) in hot pursuit of posh girl Lydia Languis (Natalie Simpson). Resident Women’s Auxiliary Air Force. 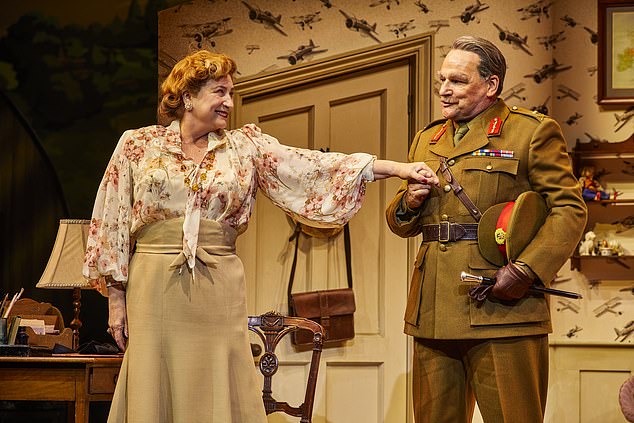 Instead of Regency Baths, however, the action takes place at an RAF base in West Sussex during the Battle of Britain.

Despite being ‘sweet’ on each other, she has discovered a woman’s lib, and is now sweet on someone else: Bess’ axle-greased Yorkshire mechanic Dudley (Kelvin Fletcher).

The real star, though, may be Caroline Quentin as the voluptuous dowager Mrs. Malaprop who owns the ‘country piles’ that are requisitioned as an airfield. Delivering her soliloquisms with pride and determination, she declares herself ‘conquered by emulsion’ and laments that she has ‘become a window’ since her husband’s death.

But perhaps her best moment comes when she relives her character’s music hall pre-history, accompanying herself on ukulele while singing with a soprano warble.

Best seat in the house

Jodie Comer can now be seen on the big screen in a live recording of her stunning turn as a young barrister embroiled in a harrowing rape case in Suzy Miller’s harrowing monologue.

Happily for him, too, Peter Forbes is on hand as Jack’s rubicund, military throwback father who is overwhelmed by his good looks because he prefers lamb meat to be so juicy.

Bean and Chris’ dialogue is a delightful blizzard of bawdy carry-on innuendo, whether it’s borderline genius or gibberish that rolls out at such a high rate – but either way brilliantly conveys political correctness and verbal sanity as usual. Importantly, the action is sustained by a warmth and generosity of spirit that allows the two authors to create a surprisingly emotional finale.

Young director Emily Burns is clearly a name to watch and her production revels in updated stock comic characters from the 1770s to the 1940s. Corden roared in deft slapstick, but the whole house was united in delight at the company’s ballroom jitterbug and Looney Tunes boxing match between Jack and his love rivals.

Among those rivals are seamy Aussie Bob (James Corrigan) who mistakes ‘meditation’ for physical self-indulgence; and Sikh Tony (Akshay Sharan), an upstanding, Oxford-educated poet. But there’s also a grand sub-plot involving Mousey Roy (Jordan Metcalfe), who is nervously – and married – to his posh cousin Julia (Helena Wilson), whose aristocratic family has left Scotland ‘because of the food’.

My only niggle was the redundant air-battle footage projected at the end of each half. But Mark Thompson’s set is a comic-book delight, featuring a vast David Hockney-ish vista of the Sussex Downs. It distills the comic tone perfectly and is a rare burst of sunshine in the national.

Delightful and de-lovely Never on board SS American…

Verdict: This is the top!

about 20 minutes into this fun show, I stopped taking notes – because there’s nothing better than walking away from one of its famous numbers, ‘It’s fun, it’s delicious, it’s cute’.

After a nationwide tour following last year’s sellout and garlanded run (with nine Olivier nominations), SS American is now reborn at the Barbican with new principals under the direction of Kathleen Marshall (who also choreographed the show, revisiting her Tony Award-winning 2011 production).

Cole Porter’s musical — part of the book written by PG Wodehouse — was a soul-reviver in the Depression era when it debuted on Broadway in 1934. Now, with a great new book by Timothy Krause and John Weidman, this perfect post-pandemic pick-me-up. 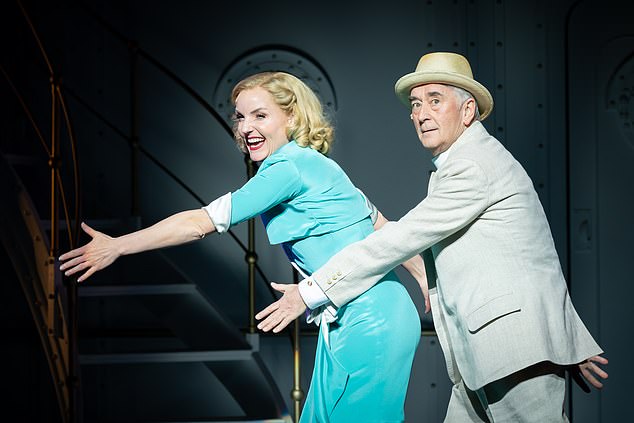 About 20 minutes into this fun show, I stopped taking notes – because there’s nothing better than walking away from one of its famous numbers, ‘It’s fun, it’s delicious, it’s good’.

The feather-light story concerns Billy Crocker (Samuel Edwards), who is in love with American debutante Hope Harcourt (Nicole-Lily Basden), who is sailing from New York to London on the SS American to marry an English tough lord. Evelyn Oakley (Hayden Oakley).

The jokes are hilariously lame (you’ll laugh anyway) but the energetic song-and-dance numbers are great; Anything Goes and Blow, Gabriel, Blow brought the audience to their feet. Mr. Callow clearly enjoys himself as the self-important Yale man Whitney and Carly Mercedes Dyer (as the gangster’s mole Erma) steals every scene he’s in, while Miss Alice stands out in a perfectly fine cast.

Derek McLane’s three-story ocean liner set and John Morrell’s costumes both have the wow factor, while the band (under the tight direction of Mark Aspinall) adds to the evening’s raucous fun.

At the Barbican, London (barbican.org.uk) until 3 September.

The rise and fall of Putin’s archenemy

Just six months ago Peter Morgan, the writer and producer of The Crown, might have justifiably feared for his life if Netflix had pitched a drama about Vladimir Putin and his sworn enemy Boris Berezovsky. Now, thanks to the war in Ukraine, you can say what you like about Putin and co – they have a lot of other fish to fry.

Tom Hollander stars on TV’s The Simpsons as Berezovsky, a billionaire who bears an uncanny resemblance to Springfield’s power-crazed supremo Mr. Burns.

But it’s still a seriously fascinating play from Morgan, whose last play was Frost/Nixon in 2008. Instead of American politics, he swims like a plucky pilot fish in the shark-infested waters of post-Soviet Russia. 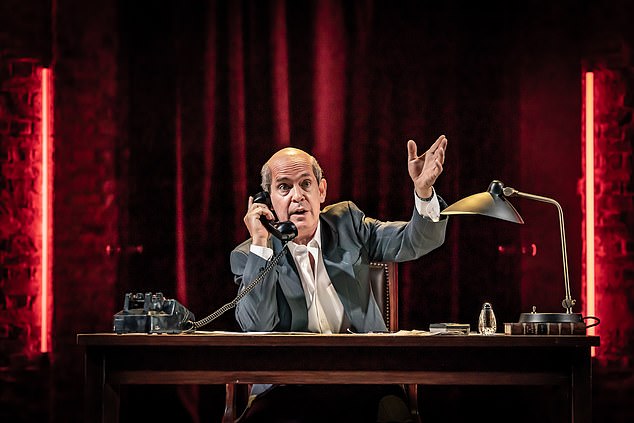 Tom Hollander stars on TV’s The Simpsons as Mr. Berezovsky, a billionaire who bears an uncanny resemblance to Springfield’s power-crazed supremo, Mr. Burns.

There he has Berezovsky avoid a car bomb, manipulate Boris Yeltsin’s daughter Tatiana, strike a (terrible) paperless multi-million deal with Roman ‘The Kid’ Abramovich (Luke Thalon) and install Vladimir Putin (Will Keane) for the presidency. Believing he would be a bidable flunky.

If there’s a flaw in Morgan’s brilliant storytelling, it’s that, as Putin often has, he underestimates the Russian prime minister. He was written by Morgan and played by Keane as the underdog of the KGB (later FSB). It would be very powerful to have him as the powerful ambiguous antagonist we know him to be. After all, this was the man who had the courage to seize control of the law – and law enforcement – to bring down the oligarchs in Russia.

Morgan is more interested in personality politics, though; and paints a favorable picture of Berezovsky in line with his own self-image as ‘patriot, cardinal and kingmaker’. All that is a gift to Hollander, who revels in the hubris of a man who fancies himself a good judge of character—but whose tragic life story proves just the opposite.

Oozing charm and cynicism, and fingers always weaving thoughtfully around each other (‘excellent’, as Mr Burns drinks), he’s a kleptocrat whose every inch counts.

Even Thalon’s shy Abramovich entertains; But I find it hard to believe that the former sugar-daddy of Chelsea FC and ruthless controller of the Sibneft oil empire could be such a bleating sheep.

Jamel Westman is more admirable as Berezovki’s fellow exile and ex-FSB minder Alexander Litvinenko, who is gruesomely murdered in Mayfair.

Rupert Goold directs Miriam Buther’s stage with a characteristic touch of song and dance that looks like a cross between a casino, a pole dancing club and a Kremlin walkway.

As a snapshot of recent Russian history it’s a humdinger. The reality, however, will be much worse, and much darker.

Verdict: The stuff of dreams

Warner is a ‘theatre maker’ in the vein of the visionary Peter Brook, his approach particularly suited to a play in which Shakespeare constantly draws attention to his stage craft, appealing to our imagination and ability to believe.

It is a story of curses and blessings, evil and redemption, endings and beginnings. Projected on the screen is a calm seashore, where the exiled duke, Prospero, washes away his magical cloak – a piece of polythene – in a storm to wreck the ship and exact his revenge on his usurpers.

Nicholas Woodson’s exasperated Prospero is also a tender father, his cloudy face lighting up as he embraces his daughter Miranda, calling her ‘the cherubim that cannot save me’ during her 12 years of exile.

Tanvi Virmani’s Miranda is a true delight. Dressed in her father’s cast-off trousers, she glows with innocence and wonder, falling instantly in love with the first young man she sees, only to find her father and Caliban, the monster of the island, living in cruel and hideous underwear.

An extravagantly funny jester, Trinculo (Stephen Kennedy), and his drunken friend, Stefano, have fun near Caliban’s picketing with alcohol. Their gross physicality contrasts sharply with the refined otherness of Prospero’s soul, Ariel, a mesmerizing yet Dicky Beau.

Fiona Shaw’s voice bubbles through her mask-like face in a feat of expert ventriloquism. When Prospero offers him his freedom, he collapses, as inert as a puppet whose strings have been cut. Is this freedom or death penalty?

It’s a heart-stopping moment, in a production that shows humanity at its most beautiful and outrageous.